What is Carbon Laser Peel?

Carbon Laser Peel is an increasingly demanded laser technology to resurface acne scars. It combines the absorption power of carbon and rejuvenating power of laser to help boost collagen production from inside of the skin. By doing so, it also exfoliates the skin, and improve overall skin texture.

How Does Carbon Laser Peel Work?

Firstly, the doctor will clean up your face with medical-grade skincare to remove any unwanted substances. Then, a dark carbon layer will be spread evenly on your skin. Afterwards, the doctor will be aimed an appropriate-setting of laser to your skin. This will cause a chemical reaction to your skin, and generate more collagen to help improve your skin quality.

The darker shade of the carbon will allow your skin to absorb the laser faster and better. Then, a vacuum will be held on to the skin to remove the particles and the damaged upper layer of the skin.

The exfoliating process during skin-whitening treatment also removes the unwanted substances on your skin such as excess sebum, dust, and dead skin cells. Without these substances, your skin will be able to breathe better and shrink the pores.

Carbon Laser Peel treatment is a fairly new laser resurfacing treatment that harnesses the power of laser beams to address various skin imperfections. By enhancing the radiance of the skin, it simultaneously produces a smooth, fresh layer of lighter underneath the old layer. Other benefits of carbon laser peel include:

What Problems Can It Solve?

Pigmentations are mostly caused by the overexposure to sun and aging. It forced your skin to increase it melanin, causing some cells to turn black (pigmented). Over time, the pigmented skin cells increase in number, causing the appearance of that black dot on your face.

This hyperpigmentation laser treatment help to get rid of these pigmented skin cells by destroying it entirely. The destroyed pigmented cells will then leave your body through normal metabolism system, safely and naturally.

Large pores are a common skin condition suffered by those with oily skin and develop as a result of dirt and sebum building up beneath the skin. This will block the follicles, which act as the body’s passageway to eliminate dead skin cells. The build-up will also cause the skin to swell up, stretching the pores in the process and making them look larger than normal.

Other causes of large pores include aging skin which does not snap back into place and sags, stretching out the pores, as well overexposure to sun which triggers the growth of additional skin cells which thickens and stretches the area around the pores.

The carbon peel laser help to clear out the dirt and sebum deposit on your skin that causes the block. Then, the heated process caused by the laser during this open pores treatment will also boost collagen production. Collagen is a natural protein in your skin that enables your skin to return back to its normal state after being stretched.

A lighter skin tone is one of the most sought after features for many individuals, especially among Asians. Whether for personal or professional reasons, the desired outcome is still a fresh layer of skin with a lighter tone.

As the carbon laser peel is a treatment that triggers the generation of new skin cells, these will naturally be much fairer and healthier than the old cells. Your skin will also be more hydrated as it now has the ability to retain enough moisture, giving it a vibrant glow. This results in a natural whitening effect which reveals itself in a fairer skin tone.

Watch How the Procedure is Done 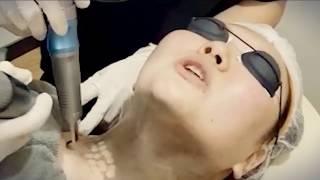 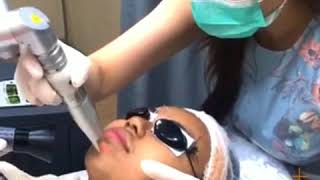 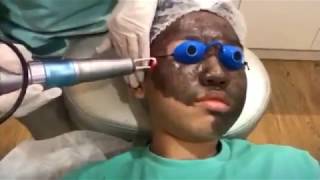 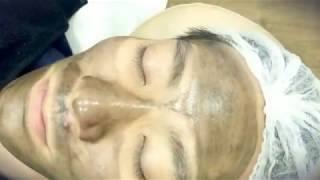 Side effects of Carbon Laser Peel

It does not cause any pain or discomfort, with only a minor sensation similar to that of pins and needles being experienced during treatment. Due to the versatile and non-physical nature of the laser, carbon laser peel is also suitable for difficult treatment areas such as the nose.

There is no downtime associated with this treatment and you can resume your regular activities immediately after the treatment. You will notice an instant improvement after the first session, making it a popular choice for many individuals.

How Much Does It Cost?

In Premier Clinic, each session of carbon laser peel cost ranges of RM1,000 onwards depends on the individual skin type and skin problem severity. Our doctors will be setting up the laser machine based on your skin condition such as pigmentation, enlarged pores, dull skin or skin texture.

Due to our doctor’s expertise and experience with laser equipment, you no longer need to be worried whilst enjoying your treatment. This peeling laser technology is a bit ahead of everything else on the market right now. Thus you may expect brighter, radiant and younger-looking skin.

Where Can I Go for These Treatments?

If you are interested to know more about how CARBON LASER PEEL treatment can help you, please arrange a session with our expert doctors. All of our doctors are highly credible and certified to perform such procedures.

We are available in 5 major locations in Klang Valley namely TTDI, Bangsar, Mont Kiara, Puchong, and KL City. You can start your skin perfection journey by contacting the number below:

Before & After Carbon Laser Peel Treatment

How often and how many Carbon Laser treatments do I need?

The number of sessions you may require will vary depending on your skin condition and desired outcome while it may also be effective to combine the treatment with other procedures. Consulting doctors will be on hand to discuss and advise you accordingly, both before and after your session. Effectiveness of the treatment will determine the individual condition. However, a number between 2-6 treatments for every 4 weeks will bring out an excellent result.

Most of the patients find it tolerable to handle. During the procedure you may experience slight tingling and minor sensation on the skin where no anaesthesia is required.

What parts of the body can be treated with Carbon Laser Peel?

Skin problems can affect any part of the body. Carbon Laser Peel is safe to be applied to any affected area like face, neck, arms, knees, buttocks and the back of the body.

Be the first to know about our time-limited, exclusive promos